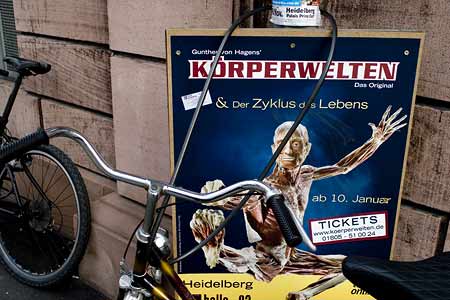 Körperwelten shows the bodies of dead people, conserved by the process of plastination, which was invented by Gunther von Hagens, born Gunther Gerhard Liebchen. He also is the mastermind behind the company who is marketing the procedure for various purposes, one important part of them is to show them in various exhibitons under the brand name "Körperwelten" (body worlds). A main characteristic of these exhibitions is to show the corpses in spectacular poses, such as sportsmen, chess players or as a saxophone player.

The principle of plastination is the replacement of water and fat in bodies by plastics, yielding specimens that can be touched, do not smell or decay and retain most microscopic properties of the original sample. A fascinating technique, very useful in the field of anatomy - von Hagens' somewhat freaky use of it bestows him a probably pleasant income.

Accusals against von Hagens, that he had used the bodies of executed prisoners from China could not be proved. In fact, he removed bodies with clear signs of executions from his collection and did not use them for exhibitions.

Thus he tried to regain some reputation, he had lost on the other hand by macabre actions like dancing on a parade float at German Love Parade (a techno music festival...), surrounded by people in "Körperwelten"-Suits, i.e. in the look of the skinless corpses of his exhibitions. Other actions, like the planning to sell anatomical specimens to private customers, as it was announced in early 2008, were withdrawn swiftly. But who knows, whether they were meant seriously or were just another advertisment strategy to gain some publicity for the exhibition business.

Plastination is an interesting concept,after all, and after I missed the first big exhibition some years ago at Mannheim, I actually intended to visit the current Körperwelten (Body Worlds) exhibition, shown from January until April 2009 in Heidelberg, to write a few words here in the blog and especially to illustrate it with some photos.

Gunther von Hagens’ approach of using the corpses of dead people to arrange hokey arrangements is highly controversial. But anyway – I would have preferred to make me my own picture. “Making a picture” in the strict sense of the word, because taking photographs is one part of my daily work and I consider it to add some aspects, which are not easily expressed by words.

Unfortunately, the organizers of the show are extremely restrictive in assigning photo accreditations - and so denied one to me, although I am a registered journalist. I stopped short, considering what’s the reason behind this refusal, but of course it is blatantly obvious: hands on the images of the exhibiton is an extremely important marketing issue, the manipulation with images in one direction or the other is an crucial issue in a context, where images transport most of the information and image of Körperwelten to the public.

Don't let me be misunderstood. I strongly back the organizers, to prevent people to use flash lights and mobile phone cameras in the exhibition to take macabre snapshots (although I am sure, they can't prevent people from taking pictures with that kind of equipment...).

Although the organizers of Körperwelten don’t have any fear of creating more or less tasteful arrangements of cadavers and to publish images of these works, the control over the images is an essential part of the staging, just as von Hagens appearance, allegorizing himself as an artist (with a somewhat ridiculous copying of famous German artist Joseph Beuys' appearance).

An independent look, a view that might differ from the officially published, obviously has to be avoided like the plague. It tells us something about the aplomb of Körperwelten's organizers. So much for critical reporting.

Besides the questionable staging of the spectacle by the organizers, the individual impetus for donating one's body to Körperwelten is another interesting point: Perhaps it is just the dream of some people to grasp their little part of fame. Even after death. – although it might be not much more than prettifying the look of the town on an advertising poster between parking bicycles...

Anyway - unfortunately no photo essay about Körperwelten, in fact only some reflections about the exhibition. What do you think about body worlds / Körperwelten?